CHERRY HOLDING S.A. is a real estate investment company in Greece. It deals with the companies of the VST GROUP group and the law firm NEXUS LAW FIRM, which cover the entire spectrum of real estate.

It is active in investment projects related to the construction of modern buildings and is managed by executives with significant experience in finding investment opportunities, implementing investments and creating value for investors and the company.

The company identifies and researches buildings and plots of land that can bring significant rate of returns to its investors. Through their renovation or construction and the creation of modern buildings in highly marketable areas, it ensures high returns for investors.

It should be noted that the projects have secured bank financing, which greatly improves the final returns for investors.

In the area of 40 Ekklisies, a four-story building is under construction. The building permit is expected to be issued by mid-September. The said project has been covered in its investment part.

On Karakasi Street, in Eastern Thessaloniki, the project concerns a nine-storey building. The building permit is expected to be issued by the end of November 2022. And this project has been covered in its investment part.

In the area of Analipsi, the project concerns the reconstruction of an existing five-story building. The project has been covered in its investment part.

In the area of Ano Glyfada, the project concerns the construction of a four-story building. The project has been covered in its investment part.

In the area of Cholargos, the project concerns the construction of a six-storey building. The project is 20% covered so far (early September 2022).

At the same time, it has a significant advantage in construction costs, as the projects are serviced by companies of the VST group with which it cooperates.

The many years of experience of the company's executives in the construction, brokerage and banking sectors are the basis for the fulfillment of the objectives of each business plan.

The company's goal is the long-term and most efficient relationship with its investors in order to implement a series of construction projects in the present and in the future.

Construction of a four-storey building in 40 Ekklisies 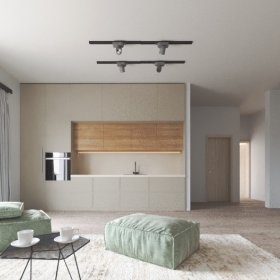 At Agathoupoleos Street in 40 Ekklisies, works will begin for the construction of a four-storey building with a pilotis and a basement. Storage rooms will be built in the basement, parking slots will be created in the pilotis and two- and three-room apartments will be shaped on the floors. The architectural appearance of the building is extremely impressive. All the spaces have been designed having set functionality as a priority and the construction will be done according to all the rules of art and science.